For those of you following my ongoing treasure finds while running, it happened again today. I’m still working my way back to normal mileage following my viral lay-off so my runs are relatively short. It doesn’t take a long run. This day’s weather was perfect, my eyes were open, and magic was afoot. After a short warm-up I enjoyed a phlegm free jaunt through the neighborhood. My two treasures were found in first half mile so yes, I carried them all the way home. I’ll get to the yams in a minute.

You might think this is a domino. It’s not a domino. It’s a pass key for a secret society of fairy folk. As keeper of the Halloween fairy wings and miniature cowboy lassos, I am now an honorary member. A meeting was called to pass out the new pass keys for 2017 while I was sick. Since I couldn’t make the meeting they left it for me where I’d be sure to find it, complete with the fairy dust to help me identify it as such. February 1st is an important day among magic people, so this is right on time. 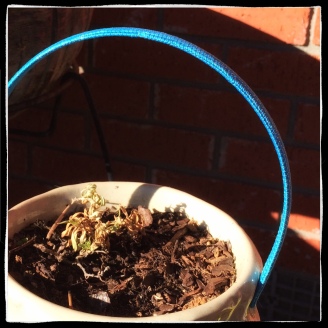 You might think it’s a bright blue headband. It’s not a headband. It’s a tiara. A simple, sparkly, low-tech tiara. I’m meant to wear the tiara to the festivities on the aforementioned holiday. All attendees will be wearing tiaras, so again, right on time.

And finally, the yams:

The Chef went with me on the run. He’s been running with me all week. After we finished we discussed the yams and decided it was time to collect them. Because as you can see, they are no longer delightfully ironic. They are beginning to resemble trash. It’s been several weeks now and there have been no takers despite their place of prominence on a busy corner. Plus, one of them is now badly damaged. 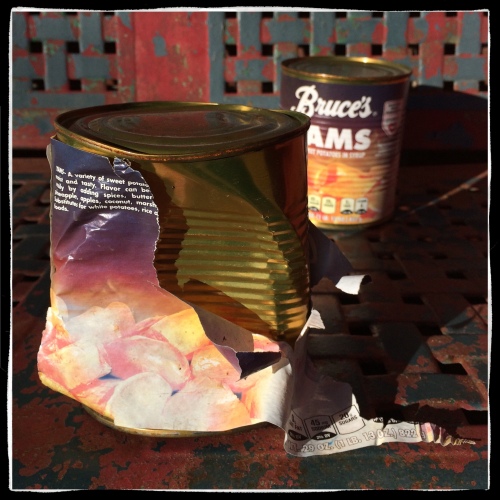 We didn’t want to split them up and we certainly didn’t want to leave the intact can to be abused like the battered one. So we scooped them up. I’ve decided to take them with me to the Pass Key & Tiara ceremony, as an offering. Never attend a holiday fairy observance empty-handed, right?

The road provides. Everything I needed for fraternizing with brownies, pucks and pixies. The benefits of running are physical, mental, emotional, and mystical.

(living off the land)