Continuing the weekly arguments that 2016 was not all bad, I’ve created a series of posts designed to exonerate the year. This is the fourteenth installment in that series.

A year ago this week I rolled up on the 100-day mark of my streak of self-portraits taken and shared, including home yoga practice on the living room floor. My focus that week was stripping down to bare face, bed head, and no fancy filtering. No camouflaging of anything deemed unflattering. I resolved to let As Is be good enough. I then resolved that good enough was no longer an appropriate descriptive, so I dropped the enough part. It was better than good enough; it was simply good. I was good in 2016.

A year ago this week I wrote in my journal:

The notion of thriving is a noble one but the manifestation of thriving can look very different from one person to another. Thriving is not necessarily measured the same for all people. A satisfying day’s work and a peaceful night’s rest can be evidence of thriving for someone who doesn’t make a ton of money or enjoy any kind of rockstar status in the corporate world. Thriving is relative to what we value and what we find fulfilling.

A year ago this week Danielle prompted me with “It would be a miracle if…” I responded, “It would be a miracle if I recognized a miracle every day.” A year later I still catch myself mired in cynicism and needing this reminder. And yet, the fact that this statement was living inside me waiting to be manifested as wisdom is a miracle not to be missed or dismissed. I polished the diamond in 2016.

A year ago this week I was also prompted to “Name is so I can change it.” I named: 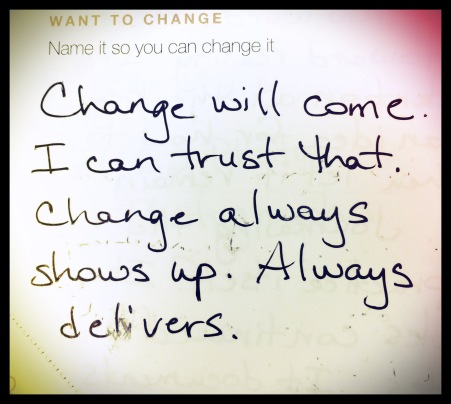 A year ago this week I identified intentions for the month of April. Among them I listed:

Release what serves me not.

Allow myself the luxury of NOT getting it all done every day. Allow myself to thrive within my natural rhythms. Let it rise. Let it fall.

This feels significant because the intentions of most humanoids in the Spring are all about new beginnings, rebirth, doing, achievement, starting fresh, etc. and mine were all about closure, release, and contentment. I bucked the system in 2016.

A year ago this week I ran my final 10k race with the ladies pictured and many others. It would turn out to be my final road race ever. With those last 6.2 miles finished in the April sunshine, my competitive days were complete. My first race took place in 1995. My final race was run in 2016. After 21 consecutive years of running races most months out of the year, I retired. In 2016 I knew when enough was enough.

A year ago this week I struggled with my reactions to a terminally unhappy person. My struggles were amplified by the fact that I worked in very close quarters with his abiding misery, complaining, lashing out, and tantrums. When it was determined that no one could/would do anything about it, I knew change had to come from me. Coping was my responsibility. I could deal, or I could leave. I would leave a month later but in the meantime I counseled myself (in writing);

Unhappiness is his choice and his right.

Let him be. Whatever he wants to be — even unhappy.

In 2016 I learned to ride the dragons I previously tried to slay.

Oh yes, it was definitely a year of shit, chicanery, and shenanigans but the year was an important one with important things accomplished and discovered. It was not all bad.