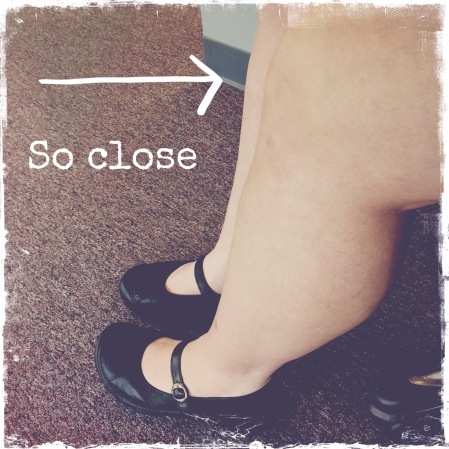 We are close enough now that it is safe to put the champagne on ice. I almost got the knee into a Child’s Pose last night.  I’ve been tempted to bargain with the Universe (how other people say make a deal with God) that I promise not to ever run another mile if I can just do Child’s Pose again. But bargaining with the Universe is a sucker’s deal, we know this.  I have gotten my fanny out of bed at 4:45 a.m. every morning, driven to the gym, and done the work; earning that Child’s Pose and not bargaining for it. I’m so close. So close.

For my non-yogi readers, Child’s Pose looks like this:

I don’t care if I’m ever able to do any or all of the fancy schmancy “advanced” poses ever again. I care about being able to do Child’s Pose.  After an hour of yoga last night I was invited to try Child’s Pose again. Up to this point I was stuck at hands and knees with little to no weight on the left knee. Last night I got nearly halfway there, heavily modified, before I stopped for safety’s sake. So close now, y’all. So close.

This is wellness too. The wishing, the bargaining, the deal-making with ourselves or mystical outside entities — it might help us compartmentalize our anxieties and make us believe we’re really doing something versus nothing but this is not how wellness works. Pun intended. Heal is a verb. Healing is a process. This means action. We have to get up and do the work, frustrated or not, angry or not, dejected and disenchanted or not. That disenchantment is sometimes the highest hurdle.

I know how the athlete’s brain functions. It says, “If I can’t train the way I want, why bother? Because anything less is just some pansy-ass substitute that won’t get me the results I need.”  So if I can’t run the miles I might as well say the hell with it, because walking them is not the same (usually said with a runner’s unique contempt and derision). Neither is swimming. Neither is riding a bike. I’m a runner, dammit. I don’t walk. Walking humbles a runner even more than an injury because it is perceived as a greater insult. We are quick to stipulate, “I’m walking because I’m injured.” In our haughty minds an injured runner is still a runner who can’t run yet while a walker is not a runner. Breaking this mindset is also part of the work of wellness.

Runners are inclusive of walkers as long as they get to hold themselves apart (above) by running. We pretend that we don’t feel superior and we act rah-rah supportive but tell a seasoned runner that he or she is now limited to only walking and watch the facade crumble. It’s the same with other athletes. Rarely will you see an athlete rehab an injury with an activity they consider beneath their ability or prowess unless there is no other choice. And not because the alternative wouldn’t be good therapy but because the athlete wouldn’t deign to participate in an activity they find inferior, like runners with walking.  If you do find a runner walking you can bet they are doing so with a fast and ready disclaimer, and yet sooner or later, everyone walks.

As it turns out, none of this non-running work is pansy-ass. It’s still hard work, especially because without the high intensity of running, we have to do all of it much longer in order to replicate the benefits. And the body thrives and suffers as a whole, not in individual parts. Let the body atrophy to heal a knee and we get a weak body trying to support a weak knee. This is why it is critical not to just get pissed and sneer why bother if we can’t run or train as usual. The rest of the body needs to roger up with strength to support the weak knee, now while it is healing, and probably forever after. The pansy-ass move is opt-out due to pride or elitism. This is also part of the work.

Every extra inch that my knee will bend makes labels and titles and identities matter less and less to me. Am I an injured runner? Am I walker now? Am I a swimmer now? Who cares? I am Relieved. I am Healing. I am Working at it in baby steps but I am Close. My next breakthrough won’t be enough recovery to reclaim a former identity or enough clout to establish a new one. It will be Child’s Pose. A badass, hard-won, well-earned, rockstar Child’s Pose.

Write about being a good listener.

Write about the trail in the snow.

If you were transported to the setting of the last TV show you watched,

where would you be?