Continuing the weekly arguments that 2016 was not all bad, I’ve created a series of posts designed to exonerate the year. This is the twenty-first installment in that series.

A year ago this week I wrote a prayer that turned into the kind of prayer you sing. So I guess I wrote a song, though I didn’t think of it as such at the time. Dead center on the page is the word that seemed to be a recurring theme for Week Twenty-One — Manifest. 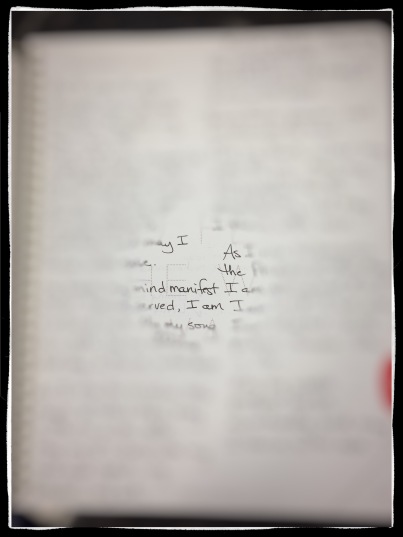 And the eye (my eye) naturally drops to the affirmation below it, creating a Yoda-style mantra in the middle of a song with seven verses. Manifest, I am. In 2016, manifest I was.

On the facing page Danielle asked me to name the thing I do most naturally. I wrote:

I hear the song resonating through the layers.

Below that she asked me to confess what I was avoiding a year ago this week. My confession:

Nothing, right now. I expand. I bloom. I claim space. I tell the truth. I illuminate wealth. I thrive with ease.

And further down she coached me not to worry about a solution yet but to name what I wanted to change. I responded:

And finally at the very bottom where I would typically put a gratitude list I offered:

The money will be there. It will come.

This flow down the page of my journal from a year ago was a manifestation of energy and intention. I opened a channel for abundance. I’m glad that money was the last thing on my list and not the first, but there is power in naming things. It matters that we say it and it matters how we say it. It’s important to call it out if we mean to call it forth. And I did that. I was a reveille in 2016.

A year ago this week I was a little over one-third of the way through my self-portrait project and writing about how to deal with the feedback. My answer then was the same as it is now. The point of the project was choosing to be seen, not seeking approval. It is impossible for people to look at my image without reaction. Those reactions show me truth about the beholder. The image is a mirror. The feedback is something within the beholder begging to be heard. I am the trigger, the catalyst, the release. I set it off in 2016.

I remember how much we lost in 2016; how much we hurt and feared and fought. But my friends, it wasn’t all bad. Chris Cornell was still alive.

The things he put into the world can’t die, which is a comfort, but now we measure their preciousness in different terms because there can’t be any more of it made. Which is not a comfort, but it is manifest.