Life in the Bible Belt means everything is a sign of the end of the world. I’ve been hearing from Christian brethren my entire life that we are living in the “end times” and Armageddon is nigh. I’ve been warned these are the Last Days for the last 16,425 days. Every significant astrological date or event, such as yesterday’s eclipse, is expected to be the end, so readiness among the faithful surges around these events. If yesterday wasn’t the end, the next end is predicted on September 23, 2017. If not then it’s supposed to be the next eclipse in 2024. If that’s not it there will be another, and another, and another. As I have done with every End of the World prediction for my entire life, I went outside to wait for it and watch it happen.

I don’t think it happened. I sent a text message to The Chef after the eclipse passed,

He sent me a reply,

We ate vegan nachos for dinner and watched Game of Thrones a day late. It definitely feels like we are still here and Here is still here.

Not that I believe The Chef or I would be rapturously captured before Armageddon, but Armageddon didn’t come and wipe us from existence either. So this wasn’t it. It was another Last Day. Another End Time. But not the last and not the end. While I was waiting I took a bunch of photos of the eclipse (safely, with precautions). The image posted below is my favorite. While angling my smartphone away from my eyes I accidentally touched a randomize function on my camera app, adding a wave lens. What a happy accident! I’m dazzled by it.

Every time I look at this I think Shakti. Before I explain I should warn you that reading on could seriously jeopardize your future Armageddon experience. If everything works out the way I’ve been told my entire life, you will go to Hell for this. Proceed with caution or turn back now. 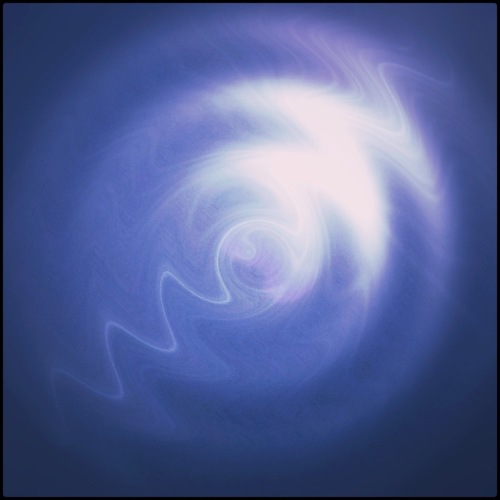 The photo is not the condemnation part. You’re still safe at this level. The app automatically saved a copy of the raw original and the randomized image, as shown below. I deepened the blues and added a vignette to get the final version above but I wanted you to see how it happened for authenticity’s sake. 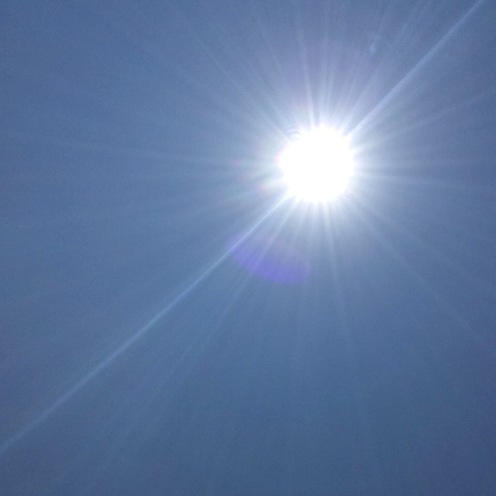 No retinas were burned in the creation of these images. But the safety zone ends here. You will burn if you read any further. Go back. Go away. Get thee hence.

Shakti is difficult to explain succinctly in the same way that Love is difficult to explain succinctly. Simplified way, way down for nutshell purposes, Shakti is a form of energy that is believed to exist in a relative state of dormancy at the base of the human spine. It sleeps. It waits. It hangs out (benign and harmless) waiting for a switch to be flipped, if you will. When activated the energy rises upward toward the top of the head in a coiling or spiraling motion.

Imagine a snake climbing a pole, winding around and around as it climbs up from bottom to top. This imagery has been repeated so many times through the ages that Shakti is rarely explained without it. Many traditions call to mind a serpent sleeping in a coil near the the base of the spine until a physical, mystical, or spiritual event causes it to wake. When the serpent is awakened it travels upward to the top of the head, energizing the body/spirit/mind as it goes. This seems to be easier for people to imagine than an upward spiraling beam of light or heat or colorized gas or however else the mind conceptualizes the word energy.

What kind of energy is it? Divine energy. Sacred energy. It is the energy of love, empowerment, ecstasy, rejuvenation, awakening, liberation, and it is generally considered a feminine energy. Shakti is what makes us feel fertile with creativity, pregnant with love, powerfully protective, sexually potent, supercharged with inspiration, and innately wise, well, and strong. It is the underlying energy when we describe ourselves as “fired up” or “on fire” or “fierce” or “bursting” or the feeling that we suddenly “come alive.” It’s what we mean when we say Girl Power. In some traditions Shakti is the equal female complement to the conventional male form of deity, making it complete, balanced, and whole.

What’s so naughty about that? Shakti energizes power. Shakti energizes our powers. Our natural power from within. As you know from your scripture, we aren’t allowed to have any power or powers of our own.

Shakti was considered dangerous around the dawn of today’s modern religions. Shakti is why witches were burned and why a practice venerating a female aspect of God (Goddess) was deemed a cult rather than a viable faith or religion. When the ancient worship of the Divine Feminine became replaced by the Divine Masculine, this completely natural form of human energy was disavowed. All powers in the Universe were ascribed to the Omnipotent Fatherly God/Creator alone. All power was then God’s power. Any powers we might have must to be given to us, must be granted by God’s discretion, and none of it could then ever come from within or be available to the common man or women except through God’s permission. Within this doctrine Shakti did not (could not) exist. It become religious law that Shakti (or anything similar) did not exist and the suggestion was blasphemous. As we know, refusal to submit is/was punishable by death.

Some believe this is why the story of the Garden of Eden depicts a serpent as the embodiment of evil, and why a woman was seduced by it. The serpent was (and still is) a symbol of Shakti. The fruit of the Tree of Knowledge was forbidden, and the fruit made the first humans self-aware, which was depicted as sinful and punishable. Some believe the story was written this way deliberately to suppress Shakti and support religious laws prohibiting any acknowledgment of our own Shakti as sinful and spiritually criminal.

This is a super-short, non-comprehensive statement of theory, of course. The concept of Shakti is a deep one. There is far more to it than this heavily simplified explanation. Shakti energy is also present in males; it’s not just a girl thing. Shakti is also considered a form of love. Shakti is also described as our primordial life force, or the aspect of that force which makes us sentient and activates our consciousness. Shakti is also described as a vibrancy related to wellness, such as the glow or bloom of wellness. It is the feminine element of divinity in which masculine and feminine are equal and interdependent.

Shakti is the mystical aspect of science. Shakti drives the primal instincts of survival and evolution. Our appetites for learning and knowledge are surging with Shakti. Shakti makes emotional bonding possible. It attracts us to each other, binds us to each other, compels us to nurture and protect each other, and empowers us to break apart from each other. Shakti is the desire which births our art into the world. Shakti is the undercurrent of fight or flight. Shakti is fire in the belly. Our Shakti is part of our soul’s signature, unique to the individual, yet present in everyone whether mostly dormant or completely activated.

The concept of Shakti (and its many interpretations) is simply too vast for a single blog post, but I couldn’t be the bearer of a celestial photo such as this without mentioning it. Generations of human beings were silenced on the topic in the hopes that a woman like me might never know anything about it. And yet I do. And if you are reading this now, you know it too.

As the story goes, subscribing to the notion of Shakti means the End of the World will include my final punishment for heresy, blasphemy, and sacrilege. By promoting the theory of Shakti I have not only imperiled my own eternity but that of my readers as well. So to be completely fair to you, reader beware and reader repent, lest our Last Days expire with all of us believing we are freckled, dimpled, wrinkled creatures of our own divine energy and power, and the knowledge of it our damnation.