Saturday! Whoo hoo! Who’s got two thumbs and gets up at 5 a.m. on a Saturday? This chick. I can’t help it. I get up so early during the week that I’ve lost the ability to sleep in. I was naturally awake at 5 a.m. and this is STILL later than I usually sleep. There was also a hungry pet involved. She’s gotten used to early breakfast too. I always wonder if she thinks she’s doing me a favor. You know, as in maybe she doesn’t understand weekends and thinks I’m going to be late if she doesn’t wake me? Or maybe she’s just hungry. Either way, I’m up.

I promised more on the crystal business. As I mentioned, I’ve always been skeptical. I previously regarded crystals and minerals as pretty rocks. I had a hippo made of malachite for a while. I enjoyed it but didn’t think it of it as anything more than a lovely organic object made by a talented craftsperson. I never had much interest in the whole crystal energy/healing/manifesting thing. I came to understand over the years that all matter is also made of energy, so every object I behold contains energy. I even came to believe that emotional energy can cling to spaces and objects within those spaces. But the notion that crystals were any more special than any other talisman or devotional item or spiritual tool? Didn’t really have an opinion on that. Low interest in all that.

A woman came into my life some months ago who uses crystals in her energy work. She explained it to me. She goes up on a mountain and digs her own crystals and works with them and then bestows them upon her clients. Other times she finds particularly special or powerful crystals offered for sale from vendors who also mine them locally. Like me, she once thought they were just pretty rocks, but her opinion changed as her understanding of energy work changed. She came to believe that the energy we already know inhabits matter can be amplified by our own energy (and we are made of energy too, y’all), and that’s basically what the crystal magic is all about.

I asked her tell me more. She explained how she sets up a grid in her prayer space (altar, if you will) and places stones with a certain shape or composition in certain places. The grid is geometric, with a stone at each of the points and one in the middle. The center stone is a big deal; it’s called a generator and acts sort of like a lightning rod or beacon. It’s generally pointy (pointing up and sitting upright on a blunt end). Her prayers were spoken over this grid after gathering her own energy (desires, intentions, goals, etc.) and the crystals amplify it and send it up/out into the Universe. She was careful to specify that she always asks for what she wants with the stipulation that it happen with harm to no one — with no harm done to any person or thing.

Honestly, this is the part that got my attention. Her example rang a bell of This Makes Sense. She explained that if she needed a sum of money for something, she didn’t want to get it from someone else’s loss or calamity, like life insurance. She wouldn’t want to get the money in any way that caused or allowed harm to someone. In other words, I want this money to come to me, but I don’t want my spouse to die so I can have it. That jives with me. So I kept listening. Listening is a form of energy work, folks. It amplifies the energy of the speaker (and the power of the words). You know that, right? We call in learning. Teaching and learning is an energy exchange.

She further explained that if I wanted to try this I should start with seeking out a center stone. I should go to the crystal shops near the mountains where they are mined and walk through the tables until the right stone picks me. I’d be drawn to the right one, she said; it would call to me in some way. Then I could pick the others for a grid pattern if I liked, or just stick with the one. This area wasn’t far from the location of our celebration weekend, so I put in on the Maybe list for the trip. The Universe saw to it that the last morning of our trip was rainy and we didn’t pack rain gear for hiking. So I resorted to the Maybe list. The Chef was willing. We drove to Crystal Town instead of hiking.

On the road to Crystal Town we saw signs for the annual crystal quartz festival held at the local fairgrounds. Hmm…that didn’t feel much like a coincidence. We turned at the fairgrounds. It suddenly stopped raining. Hmm…that’s good timing. The ticket lady loved my glasses and let us in for free. Hmm…that might not be a coincidence either. I rarely EVER wear these glasses in public for vanity reasons. Universe, what are you up to?

So you know what happens to rocks/minerals/crystals when they get wet, right? They get more glittery and the colors look deeper and everything looks shinier and more magical. Under the diffused light of cloud cover tables of wet crystals glowed before us. We approached the field where the vendors where desperately trying to dry everything off. I sipped my vegan protein shake and strolled through the crystal field waiting for one of them to call to me. I got close. I touched them. I waited. I chatted with vendors and asked questions. I decided I would do a lap around the entire field first to see/feel everything. I paid particular attention to the clear crystal quartz as instructed.

The items I felt most attracted to were not clear crystal quartz. I thought I must be doing it wrong or maybe not trying hard enough. Or maybe this was all just a bunch of hooey after all. I’d canvassed the entire field and nothing of clear quartz sang to me. The Chef was nearby ruminating over some geodes. He’s always liked them. I let him visit with the geode vendors and sipped my drink, ready to chalk up the experience to Not For Me. I moved my mind on to other things like going home, prepping to start my new job in the coming week, laundry, and the like. I strolled back toward our starting point, browsing casually now, waiting for The Chef to finish up, not wanting to rush him.

I revisited the one tent with the only stones I liked. After clearing my head of the desire to find a stone, one of them spoke. Perhaps I was drowning out the call with my own inner voice saying, Oh that’s pretty or Oooo, what’s this? or How ’bout this one? The stone that called to me was a round polished ball of sea-green fluorite. I picked it up (very heavy) and I swear to y’all with no bullshit wishful thinking or power of suggestion, this thing felt like a ball of electricity in my hand. I put it down and picked it up three more times, walking away each time to look at other items. Each time I came back to it, it felt the same. Perhaps this was the one? Not pointy. Not clear quartz crystal. Not sitting upright on a blunt end. Would it matter? Maybe. I moved on.

I found a smaller black piece of obsidian that appeared to be looking back at me. I told the vendor I’d take it. He set it aside for me.

I found an egg-shaped piece of carnelian that felt like an organ, like a small heart or an ovary or kidney or testicle. He set it aside for me.

I went back to the softball-sized gem of electricity. He advised me to move it into the sunlight if I liked. I stepped out from under the tent into the sun and could suddenly see deep into the ball. So heavy and dense I felt like I was holding a tiny world. He lowered the price by two digits. I took it. 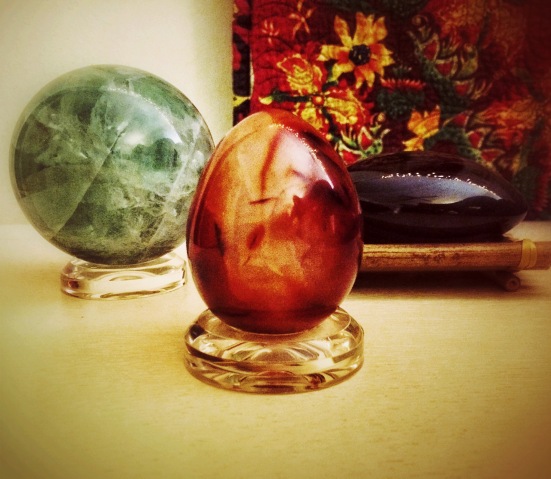 So here they are. I don’t have a grid. I don’t have a proper generator. No clear quartz crystal. I’ve got an eye gazing back at me from the depths of a volcano. I’ve got a blood-rich life force heater honer healer. And I’ve got a ball of crevice-creeping depth-plumbing electric vision. I guess I did it wrong. Or maybe the crystal lady and I just wanted different things. Or maybe we have different work assignments. Perhaps we are vessels or instruments of different purposes.

What do I do with them? I hold them when I meditate or gaze at them when I write or fondle them when I have a quiet moment of reflection at the end of the day. Sometimes it’s in the early hours of the morning before the day has unfolded, I reach for one and connect. It makes me feel good. I like feeling good. I think I do good work when I feel good. With harm to none.