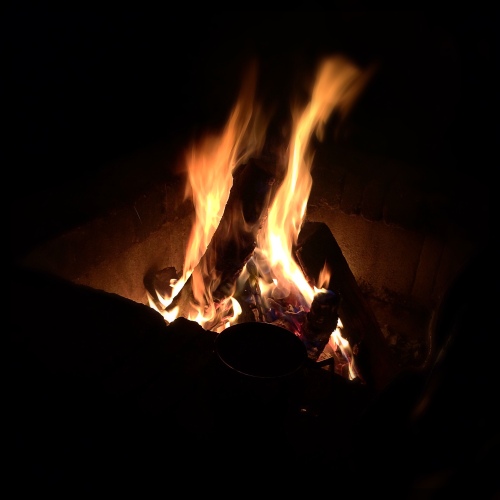 I made fire last night because the chemistry was right. This was the singular reason. The prompt of Alignment. I had no intention but I felt it as soon as I stepped outside, the signal. In my nose and on my face. A supernatural coax, time for fire, my Love.

Air was cold and dry. Sun was approaching the golden hour. Field was sprinkled with hawk feathers. Dog was near, otherwise I was nearly alone with Them — Air, Sun, and Field.

Nearly alone ~~ a silky feeling ~~ alone is near.

I pulled dry bamboo poles out of the grove to kindle the fire. A ritual of resource. This probably qualified as rearranging the furniture for the birds who would roost there in  another hour or so. They will come in from the lake for evening prayersong and thereby induce another supernatural signal. I will want to make coffee or pour wine. But first, fire.

There is a brief pause just after the fire is released from the wood in which it begs for a moment to collect itself before it blazes. Like stretching first thing in the morning or gingerly rising after a sudden fall. Slowly now, readying, easy, just give me a minute. I stepped away to allow this moment. I illuminated the every day holiday lights and lit the candles. I gave all the pots a drink and watched the smoke rise.

Cars containing humans passed in the lane. Every face turned toward the smoke. People always turn their faces toward smoke, water, wind, and mountains. We are encoded. Elemental responses.

I sat by the fire as Evening fell around me. Dog cleaved to my side. I stroked his back, filmy with hay dust. He licked my arm, seasoned with bamboo dust. Cat watched from the window, eyes vocal with knowing. I thought of a jacket but my skin sang La la la la la la la in a celebration of chill. I let the thought drift on.

Quiet now. Nearly alone. Still now. Evening touched the ground. I was reverent. I was desirous. I longed for lipstick. My skin would glow like ice soon. I wanted my lips more visible so Evening could find them. Welcome Evening, I made fire for you. I made fire for us. I wanted to be kissed. I drank water.

Magic lifted from the field. Leapers, flyers, twirlers all began warming up along the fenceline like ballerinas at the barre. I tempered my delight to appear casual so they would carry on carefree, preparing themselves for the night. I fed the fire. Each walk to and from the grove, across the field, carrying wood, was communion.

Yes, ladies. I am here with your thoughts. May you be with mine.

Then there was the Moon, wearing a stole, sexy and scarred. I stared. I flushed. I felt the poetry come out of me, ripe and potent. Thick medicinal syrup. Heady medicinal fumes.

Then there was the Moon

Then there was her curve

I kissed back. Reaching for foreign leaves at my feet I gave them to the fire and silently thanked the muse who surely seduced the Apostle Paul. Greek woman. Greek man. Greece herself. Who knew? His/her essence was Evening’s guest tonight. I was willingly enchanted. Apostle Mercy, at your service. At your mercy.

I sensed I wouldn’t be nearly alone much longer. Husband would return soon. There would be a meal and talk of the Morrow. The moments remaining became more sacred. The bubble around me more permeable. Huddle up, I begged. Circle. Embrace. Stay with me a little longer. Evening things. Night beings.

The logs at the base of the fire caught, leftovers from a previous night too humid and windless for flames. It is you who will leave. Probably to find a screen. Every night we come. To you. For you. With you. He arrived to find me thus, lingering and knowing. The wine was poured.

Later the pull of Sleep was so strong I couldn’t read. My eyes were drugged. My hips heavy. My feet tangled. I dreamed of directing my own pleasure. Clearly. Concisely. This way. Now that way. Now here. I woke knowing the fire was foreplay.