Continuing my series on notable items found on the ground while running, I have news.

In November I found the usual pennies and a red push-up bra. The bra was too small (and gross after playing in traffic) to be of use to me. The pennies were not. This is the third piece of underwear I’ve encountered over the years. I figure if I find two more pieces I can say “the usual underwear” as well. I didn’t pick up the brassiere and carry it home as I do my other treasures but I did spend the next mile wondering/imagining how it got there. Flea market on one side of the street, fast food dispensary on the other, cemetery on the corner, bridge to the interstate nearby. What about this location would make a girl want to fling her bra? Or was it the circumstances in the vehicle that were so compelling and not the location at all? No parking here, well-lit, high traffic area; not a good spot for backseat sports. Perhaps it was glee? Perhaps it was rage?

Like socks disappear in the dryer, do bras disappear en route to the laundromat? Or was it contraband tossed on the way home? I remember rushing to remove forbidden makeup in the hurry to make curfew back in the day. Was it a trophy lost in celebration, as some cad bandied it about in a show of braggadocio? Was it incriminating evidence left in a guilty party’s possession, ditched to avoid discovery? Oh, the mystery.

Not long ago I read a blog post by a woman who publicly confessed to removing her bra while driving down the highway due to a clothing sensitivity. Perhaps this was the insensitive bra? She didn’t mention tossing it out the window but due to the bra’s proximity to the overpass it cannot be ruled out as a possibility. The next mile was spent imagining the kind of insensitive remarks the bra must have made to get banned. Were these insensitive sentiments directed at her breasts? Armpits? Shoulder blades? Rib cage? Diaphragm? The mystery deepened.

I am making far fewer roadside discoveries as December rolls on because I’m running in the dark most of the time. It’s much harder to find the leavings of humanity, especially without glasses. I swear I’ve stopped for more pine cones in the dark, thinking they were so many other things, and my dog has now killed two rabbits I was sure were just clumps of fallen leaves. (Sigh) Last week when I found the banana ornament shown below glowing yellow under the streetlight, it a medium-sized deal. 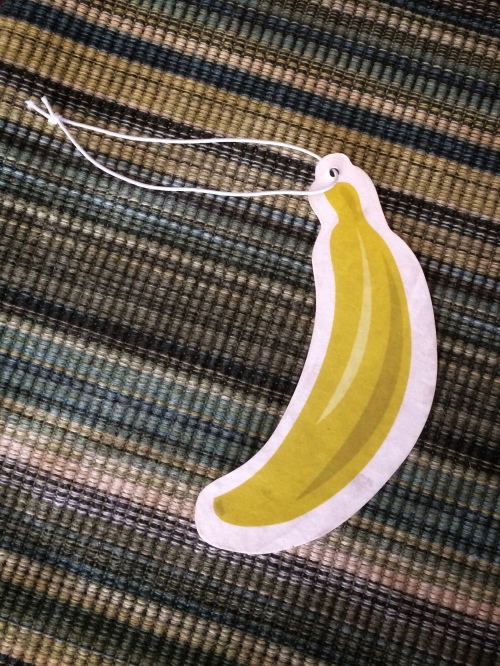 It was suggested to me that this is probably an air freshener for a car, strung to be hung on a rearview mirror. It was indeed smelly (scented) but I stand by my first declaration. This is an ornament left by woodland folk who were decorating outdoor trees in the ancient tradition of Yule. To wit:

This also explains the pennies, does it not?

I picked up the banana ornament and took it home to photograph for the purposes of this post. On the next day’s run I returned to the location of the discovery and hung it on the nearest tree. I didn’t want to chance jinxing the fruitfulness of the coming year for those who were depending on it. While justifying this to The Chef he mused that this theory might also be applied to the red bra. Perhaps the woodland folk had tried to hang it upon the Yule tree to bring … well, what would it be? The aforementioned nuts have fertility covered; what would a bra offering represent? Lift and support? I googled the term bra symbolism. It doesn’t appear the ancient Druids to whom we owe our holiday tree traditions wore bras, so all the results returned carried post-Crusade overtones:

So what were we hoping for here, woodland folk? A new year rife with feral breasts? Maybe. More whores? Could be, but it’s not like the world is running short on those to the point that we need to send up an order for more, right? It was a push-up bra, which is more or less false advertising, so we can rule out righteousness and integrity. No one who’s ever worn a push-up bra could characterize it as a nurturing experience. So I’m going with brazen. Like brass. Women who’ve been loosed and become shiny, musical, bright, and more versatile and practical than gold.