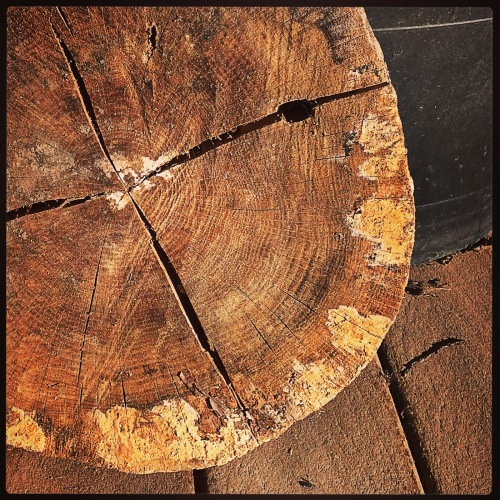 I tried to burn a Yule log this year on the solstice, closer to the traditional method in which it was not a piece of a log but the whole tree. This was the old school method. An entire tree was cut and fed into the fire by an appointee who stayed awake for the duration to ensure the log burned, and presumably, to ensure the house didn’t burn down because a burning tree was sticking out of the hearth. I had to modify because I have no hearth. I do have a fire pit. I felled a dried bamboo pole of some 20-odd feet and fed it into the fire whole, inching it gradually forward into the flames as the butt end burned.

I did not, however, save a piece to kindle next Yule’s fire. Bamboo burns far too hot and fast for this to be practical and my superstitiousness is fairly weak anyway.  I don’t bless people when they sneeze. I don’t throw salt around when I spill it. I welcome black cats across my path and a few weeks ago I intentionally and deliberately broke a mirror. Hah-cha-cha. Instead, I tried to release my Christmas issues. I continue to participate in the traditions that are important to my loved ones but my heart bears the equivalent of Christmas barnacles. I tried to use my solstice burning ceremony to shake them off, and not because I want to re-embrace or  reconcile with Christmas. I want to be less of a sourpuss about it all. I have no intention of carving the roast beast but grinching around in perpetual consternation is no fun for me, much less for the hardcore holiday revelers who must endure me every year.

I said something similar when I forgave Facebook for being Facebook. My issues are exactly that — my problems, my difficulties, my bugaboos. My issues with Christmas are mine — my issues. None of them are the fault of anyone else or the world at large. Yes, I was indoctrinated as a child but I’ve been long since deprogrammed and I don’t get to blame anyone else anymore. Not a system, not parents, not media or society. I chose rebellion, which means I chose the consequences of rebellion. Raging at the world for failure to agree with me is stupid, counterproductive, and unwell. And besides, how is it in any way a reasonable alternative to the madness I so vehemently decry?

My practice for the remainder of the season (and going forward) is compassion and tolerance while maintaining my peaceful dissent. Practice a stance of calm resistance rather than dictatorship. Forgiveness for the times I didn’t handle it well and generated my own suffering. Caused more harm than good. Good intentions, bad execution. All the belaboring. All the angst. All the mutinous blogging that only served to make everyone more miserable. Regret. Let it go. Let it be. Done is done. Know better, do better. For unto me is born this day in the city of Mercyburg, emancipation from my own tyranny.

I walk a weird, wild, winding road to wellness with my Christmas issues, and in truth, even though I’m still working at it I really only work at it one time a year, which makes progress as slow as Christmas.  I’ve said it a million times over now, all wellness is practice. Seasonal practice is still practice. My advice to myself is to respect the pace and rhythm and methods by which others come to their own enlightenment. This includes respect for the likelihood that some may never come at all. It also includes the caveat that it doesn’t look the same for everyone. Or sound the same. Or function the same. My way is not necessarily right for anyone but me. Likewise, wrong for me does not necessarily mean wrong for someone (anyone) else.