I end the blogging year with my final objects found on the run. I found a lot of cool stuff this year while running. This also concludes the running year. I ran a lot of cool miles this year while treasure-finding. The Chef and I waited for the high temperature of the day, which occurred at 11 a.m, MST (Mercy Standard Time). Three-quarters of the way into our first mile I found this:

I know you’re thinking this is a blue frog. You’d be wrong. This is half a frog. She’s missing her underbelly. Her underside. Her undercarriage. She’s a shell of a frog. She has no guts. No lower hull. The bottom half of her mouth and her lips must have been attached to her lower frame because they are missing as well.

Her back is dramatically scarred. There’s a skinned elbow on one side, rashy shoulder on the other. Flanks are also battered. She’s missing a pinkie on each hand, or whatever you call the front foot of a frog. Pinkie toes are intact on her back legs but the frontal digits have been reduced with remarkable symmetry.

Her tow hitch is still intact. Sometimes also called a trailer hitch in certain areas of Mercyburg. Or it could be butt jewelry. Like the humans who like to hang chains from their piercings, maybe?  She’s also slightly swaybacked, as you can see in the alternate view below.

You know as well I do that if I name her Mys Tery everyone will pronounce it Miss Terry. So no. Her first name is Myst. Last name Ery. I have three frogs who live outside on Boomer’s Bench near the fire pit. I inherited them when my mother-in-law died and I couldn’t bear to see them split up for the estate sale. I adopted them to keep them together. They are named Piti Full, Hide A. Key, and Not A. Key. I will introduce Myst Ery to the coven and we’ll see what happens. I think I’ve got a shot of them in here somewhere.

They were transferred to the windowsill temporarily when we had company. We needed Boomer’s Bench for seating company butts. I wonder if they will accept the new girl?

But wait, I found more! We were running along, minding our own business, when right in the middle of the sidewalk we found an open can of peaches, sitting upright, with peaches still inside. The top of the can had been neatly removed, as if by a conventional can-opener. The can sat smack in the middle of the sidewalk as if placed there deliberately. They were the store brand carried by the local mega-mart: 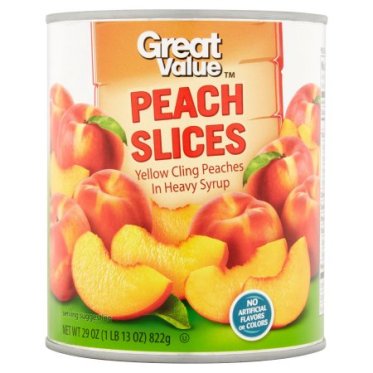 You might think this can was garbage adrift after the neighborhood collection resumed its post-holiday schedule. You might think it was litter, tossed by a yokel who couldn’t finish the entire can while walking down the thoroughfare. You’d be wrong, on both accounts. These were sitting on the sidewalk absent of any other flyaway garbage and there were still peaches inside, swimming in their heavy syrup. They were also not near a residence or a dumpster. Litterbugs typically toss, throw, chuck and kick, rather than place their debris neatly on the sidewalk without spillage, crushage, or similar abuse. Even if thrown from a moving vehicle these peaches simply didn’t look like litter.

They looked like an offering. The location of the peaches told me all I needed to know about them and their installation. The sidewalk in question was directly in front of a funeral home. These peaches were an offering to the dead. Sliced canned peaches in heavy syrup must have a favorite of someone lying inside on the slab. The fact that a mourner took the time to open the can first is indicative of deep devotion. They wanted to make it easy on the peach-loving departed. We brought the dog along on the run but luckily I was in the lead, with The Chef and Doggo lagging behind to sniff/pee upon fire hydrants. I called back to the The Chef not to let the dog eat the offering. That’s bad ju-ju, y’all. Don’t ever eat offerings left for the dead. Don’t let your dogs eat them either. He ended up eating a kleenex outside the Baptist church instead.

With half a mile left on the run I found a bright orange toothbrush near the end of a driveway. I was already carrying Myst Ery in one hand. I stopped to examine the toothbrush but balked at touching it. But not for the reason you think. I was wearing gloves (it’s finally cold here) so I wasn’t worried about picking up an implement for use in someone else’s mouth. It’s just that the toothbrush didn’t look like it had been used for teeth; at least, not human teeth. This was either the toothbrush of a yeti or it had been used to clean something other than teeth. And by cleaning I mean something closer to Mommie Dearest.

You’ve read the household cleaning tips which begin, Using an old toothbrush, right? This one was not used for any kind of gentle cleaning. This was mad-fisted scrubbing. Rage cleaning. Crawford cleaning. Whatever crevice might have been violated by this toothbrush, I doubt it will ever be the same without surgery.

Truthfully though, I couldn’t chance the first option, that it was a yeti’s toothbrush. If so, the yeti would need it. The yeti would probably retrace his steps to find it. He’d remember this as the last place he’d seen it. He’d smell me. He’d know I’d taken it. He’d track me home and with only a half-mile between home and the scene of the theft, it was just too much trouble for trifling. I mean, how would I like it if a yeti took my toothbrush to his home? How could I be sure this wasn’t a capital crime in yeti culture? And besides, I’d worry about his oral hygiene. What kind of wellness enthusiast comprises the health of a yeti’s teeth and gums? Not this kind. I let the fang-brusher lay.

This is among the many reasons why I don’t miss training for competition. I run for the hell of it. The magic of it. The mortality of it. The mystery of it. And ironically, I find wire hangers all the time.