A funny thing happened on my way to the new year. Not funny ha-ha; funny dammit. For the past several weeks I keep dreaming about pulling foreign objects out of my body. No pain, no trauma, no horror, just matter-of-factly removing whole objects from parts of my body where they couldn’t possibly be stored. Like my ear. And my lower leg.

In the ear dream I pulled whole vegetables out of my ear. Full-sized vegetables as opposed to miniatures. Zucchini, corn on the cob, and pea pods. I just reached up to my normal-sized ear and pulled them out. Bushels of them. In the dream I could feel the vegetables coming out of my ear. When I got to the pea pods they were all connected together in a long chain of pods. As I pulled I could feel the inside of my head, face, and neck being emptied of them. The sensation was as if the side of my head and neck had been impacted with vegetables and now there was a pleasant feeling of having that space cleared, similar to the way sinus cavities feel relieved after the congestion. After all the vegetables were removed from my ear a gooey white substance drained. Again, no pain or discomfort or distress. This was my right ear.

In the leg dream I reached down to an opening (a painless wound) in my lower leg, outside calf area, and pulled out two full-sized clear plastic bottles of dishwashing liquid. The bottles were empty. The brand name on the label was Ma Pretty. They’d been in there awhile. Just like with my ear, after I pulled the empty bottles out a thick, gooey white substance drained from the opening in my leg. Like the stuff inside your average pimple. Again, no pain. No freaking out. I was surprised but not horrified. This was my left leg. I’ve googled Ma Pretty dishwashing liquid. Google’s never heard of it. Google also doesn’t know much about dreams of removing foreign objects from the human body.

There was a clue. Another dream, of course. I dreamed of an encounter with someone I knew over 25 years ago. We were close. I did something awful to him. I owe him an apology. I’ve never given that apology and we’ve lost touch but I still feel bad about it. I still nurse regret over the reasons I owe him the apology (my bad behavior). I was 19 years old when we met. I think I was 23 when we parted company over my deeds. I was stupid and damaged. I did stupid things that inflicted more damage. All these years have gone by and I have never made things right. It bothers me still.

I dreamed about this fellow around the same time as the ear and leg dreams. In the dream he was lashing out at me verbally and storming off, all relative to my maltreatment of him and our friendship. I thought the ear dream might mean it’s finally time to apologize to him. Maybe the vegetables were the words and I needed to get them out? Maybe my head was impacted with regret? I found an address for him. I decided to write him a letter and apologize. No excuses, no requests. An honest, long overdue apology. And maybe an apology for taking 25 years to apologize. 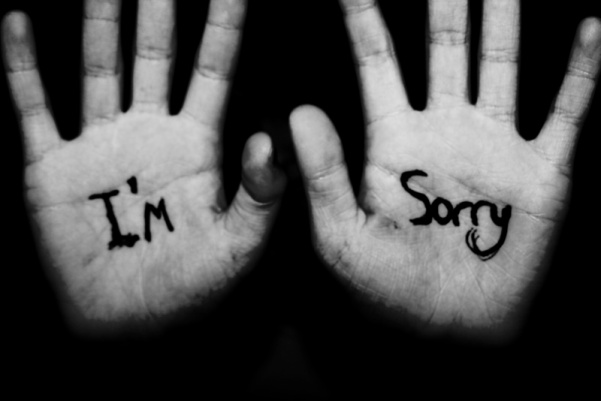 But I didn’t follow through; at least, not right away. As the Southerners here in Mercyburg like to say, I studied on it. I thought about it. I pro-ed and con-ed it. I even confessed to a friend who encouraged me. One night when I couldn’t sleep I offered up an energetic apology into the cosmos, sincere and soulful, and sent him love and light. The next morning I didn’t think it was enough. I still thought I should write the letter. I studied on it some more. Then I talked myself out of it. I hypothesized that if the situation were reversed, I wouldn’t want the apology. I have a parallel situation, which is why I felt I could say that with credibility. I’m the other party in a similar broken relationship.

Someone owes me an apology for some similar bad behavior and I’ve never gotten it. I was wronged — terribly wronged. Someone was awful to me in many of the same ways I was awful to my old friend and much, much worse. That someone never expressed any regret and many years have passed. I asked myself how I would react if the offender contacted me after all this time and tried to apologize. I didn’t have to think very hard before admitting to myself that I DON’T WANT HIS STUPID APOLOGY.  Don’t bother, asshole. I do NOT accept. I don’t CARE if you’re sorry. Go to hell. Go straight to hell. I don’t give a rat’s ass that you’ve changed or how badly you feel about what you did. Your bad feelings are YOUR fucking problem, not mine, so YOU deal with them! The nerve!

Despite the fantasy of throwing his apology back in his fat face I knew I wouldn’t really react that way. I’d do something worse. I’d ignore it. I’d silent-treatment that fucker. I wouldn’t respond at all. Stone wall. Ice him out. No response. Not even closure. I figured my old friend probably feels the same about me, so I’d better not open up any old wounds with an unwanted, unwelcome apology. Either that or my old friend would live out the fantasy and tell me go to hell after verbally flagellating me. Then there was always the chance that he’d accept my apology and forgive me, which would probably make me feel worse. But this is not supposed to be about me, is it? Maybe I’d better just leave well enough alone. Like I said, I talked myself right out of it. Then I had the leg dream.

I was honest enough with myself to admit I didn’t want the apology. But why? Why would I not want an apology? Why would I not want an apology of such magnitude; this would be a big one. Why would I reject a heartfelt offer of acknowledgement and recompense? Isn’t this what we believe we are supposed to do? That’s how it’s supposed to go, right? One apologizes. One forgives. Both move on. That’s the formula, right? Why do I feel such a gut-level revolt at the idea of being confronted with an apology I know I deserve?

How am I any different? I was heinous too. I hurt people too. If he doesn’t a clean slate then I can’t expect one either. He doesn’t get to say sorry but I do? If he can’t make amends, I guess I can’t make amends. We are both criminals. We both committed similar emotional crimes. I get the possibility of rehabilitation and parole but he doesn’t? Dammit. Dammit, dammit, dammit, dammit. This is about me after all. I want a consideration I wouldn’t allow someone else. I want special treatment. Oh Mercy, my girl, it doesn’t work that way. I want what I would deny him — a chance to apologize. To have an apology received.

In the deepest depths of my heart I do not believe he will ever apologize. I don’t believe he will ever want to apologize. I doubt I will ever be confronted with this fantasy. In all likelihood he will never acknowledge the necessity of an apology. After all this time he probably still doesn’t believe he did anything wrong and probably still does believe his actions were justified. But what if he had an epiphany, an enlightenment, a dark night of the soul, or maybe just 25 years of recovery, and suddenly wanted to apologize? Like I do? Wouldn’t it seem reasonable and appropriate? Wouldn’t it seem like the very least he should do, irrespective of forgiveness? To say the words? To make the offer? Won’t that be his gut instinct? Am I really going to incriminate him for that as well?

I think these are the two bottles from my leg. One bottle is me. The other bottle is my old offender. We can’t clean the dirty dishes of our respective situations because our bottles are empty. We know that. We don’t get to wash it away. But pus is building because we won’t say the words, make the gesture, humble ourselves, acknowledge and express our regret, do the bare minimum. Bottles once filled with cleaning fluid are now filled with emptiness, symbolic of all we lost and destroyed with our choices. If it had been one bottle I wouldn’t have seen the parallel. I wouldn’t have made the connection. This wasn’t about healing one broken relationship but two, maybe three someday.

I don’t know what Ma Pretty means, except that Ma is short for mother. One of my worst rages against my mother occurred because she died without ever making things right with her children. She was a horrid mother. She knew she was going to die and she never said she was sorry; the bare minimum. I hated her for that. Pretty might be a reference to the idiom, Pretty is as pretty does. For all the shitty mother that she was, and for all the things left unsaid when she died estranged from me, I do remember her calling me pretty. I’ve had just enough Woo going on lately to consider that she might be sending me a message telling me this ain’t pretty. And she should know. And I probably don’t want to leave things left unsaid. Or deny someone else the chance to do the same so I have a convenient excuse to keep on hating him after he dies.

So I wrote the letter. I apologized. I drove it to the post office and put it in the collection box so I wouldn’t chicken-out over the holiday. Once I did it I thought of more people from the past. I wished I could offer more apologies. Say more sorries. This old friend wasn’t the only person I ever wronged. It didn’t feel practical to try to find them all and write more letters in the short term. That would be a long term project. It was New Year’s Eve. I wanted to do something NOW to close out the year and release all those regrets.

I held a ceremony. I grabbed a Sharpie and went outside to build a fire. I got it blazing hot. On small pieces of wood I wrote my apology to each person and then fed them into the fire one at a time. When I ran out of names I named the families of everyone I wronged, including my own family. To cover anyone I hadn’t remembered yet, wrote one “To all I have wronged.” I sent it all into the fire. I symbolically released my regrets. my apologies lifted on the wind. After they were gone I went inside and washed off the smoke.

If the New Year or any year brings me an apology, I have resolved to accept it. I will not be a stone cold bitch. I will not reject or ignore it. I will accept it. If the years to come bring me safe and healthy chances to personally offer the apologies I still owe, I have resolved to take them. If not, I will accept that my releasing ceremony was sufficient. My heart was right and my intentions were honest. That’s all I could ask of any apology so it’s all I asked of myself after 25 years of regret.

Get well, my friends.