I believe I mentioned that I lost my early morning gym partner to injury first and then scheduling, so I’m back my roots for a while; running and yoga. Less time in the gym means more time on the road, weather permitting. Long-time readers of mine have heard it many times. Other than a prohibitive heat index, the only two weather events which do not permit running are lightning and ice. Snow is fine, ice is not. Our single digit wind chills abated this weekend so the layer of ice coating Mercyburg seeped back into the earth. As soon as the roads clear, runners appear. Under the snow, under the ice, I found these items on the run.

I’m not sure how I feel about this one. Well, yes I do — this one disturbs me. I found it on a residential street. I thought this must be a church thing but I can’t fathom why a church would need to print its own money and why there would be a separate monetary system for children. What would kids buy from a church which requires fake money? What things does a church sell to kids and how do the kids earn the fake money? Why wouldn’t a church use real money? Is it because it’s illegal to charge real money for the goods and services? Or is this (il)legal tender for purchasing children from the church? That’s a thing in some religions, you know. Or is it baby goats? I don’t get it.

Both sides of this fiver are identical. The shape in the left corner is the outline of the state. I don’t know what HLC means but the additional designation of children next to the logo implies there must be an adult version of this currency. I googled all the local churches in Mercyburg. I did not find a church with HLC initials. The “life” aspect of this bothers me even more than the counterfeit money aspect. Do kids buy lives with this? How the hell are those goods delivered? Who’s trafficking kids’ lives? Kids have to pay for the privilege of staying alive now? Or is this an afterlife thing? Is it adults buying the indulgences of a kid’s lifestyle? Do adults really think they need to pay someone for that?

Does the fact that I am in possession of this dirty fake money make me complicit in whatever market it supports? Can I buy back a kid’s life with this? Or is this not enough to cover the cost? Did someone actually set a price on a life? How high do the paper bills go? Are there coins? Do children earn this through labor? Do adults earn this and use it for children? Who accounts for what is bought and sold? What is the inventory? Is this money backed by a treasury? What’s in the treasury? Why are kid lives a commodity? Are there dealers? Retailers? How do customers shop? What kind of marketing takes place? The more I think about this the worse I feel. This is fucked up, y’all.

You know all the mysterious symbols we print all over our real American money? This half-sawbuck feels even more ominous than an all-seeing eye and hidden owls. Even if it’s not a church, you’ll notice the god-trusting statement was the only element borrowed from the real thing. The absence of any other symbols or motto makes it a focal point, especially as it flanks the kid life. This quasi-government with its own money obviously thinks it operates under a god’s endorsement and wants the user to believe it too. This may be most unsettling treasure I’ve ever found while running, including a man lying in a ditch in Arizona.

With all of these questions and unsavory answers swirling in my head I ran on until I found this: 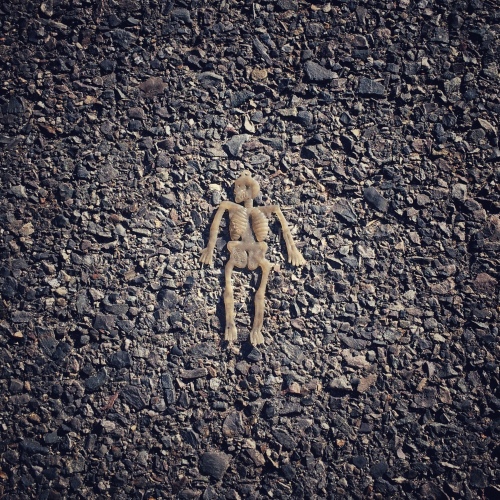 I know what you’re thinking. Normal people think of death when they see a skeleton. I’m obviously not normal. This skeleton was not dead. The skeleton was playing dead. Or more precisely, playing invisible.

The whole thing measures maybe three or four inches in length. I found it on the asphalt outside a financial investment office. Ironic after finding fake life money, no?

If you look closely you can see the pelvis is made in China. I assume this means it was a replacement part. It also appears to be sixth of a series. Sixth replacement or is six the part number? Hard to say because I didn’t ask. The creature appeared to be trying to blend in. I amplified the images above so you could see it better but there was far less contrast out on the street. You can tell from the raw unedited photo below he/she is practicing the art of camouflage: 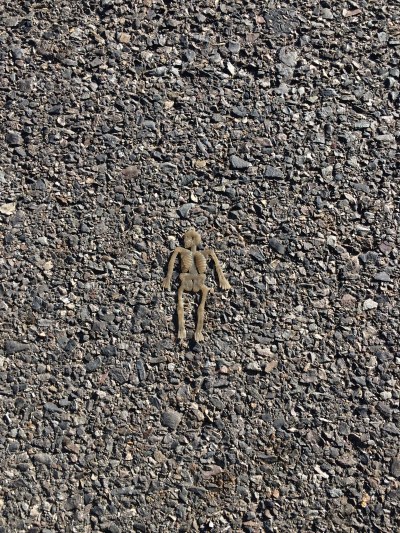 I’m lucky I saw it at all. I think perhaps the little skeli was afraid of my dog, froze in place, and flattened out to be less conspicuous. Tiny creatures of the Otherworld (with hip replacements) have no reason to be afraid of me. If I’d been alone I have no doubt I would have been approached or greeted in some way. We could have had a conversation about the pelvis and/or China. I might have asked if mini-skelis know anything about kid life money. What’s the scuttlebutt on the street? Do you need a ride somewhere? But with Doggo in tandem it wasn’t meant to be. I had The Chef hold my critter killer at bay so I could get a quick pic and then pretended I couldn’t see him/her. Normal people driving by in cars stared at me photographing the asphalt.

Around the corner I found a bottle of purple perfume. It wasn’t new. I only touched it because it was partially obscured by leaves. As soon as I identified it I put it back. I believe it is bad juju to use another woman’s perfume, even if it is discarded or lost. This is not done. That’s asking for the kind of trouble I don’t want, especially on this day, with cult money in my pocket and mini-skeletons crossing my path. Always, always, always refuse to share another woman’s perfume, even if she offers. Even if you wear the same scent. It’s bad mystical business. Never sneak a spray from another woman’s bottle in a bathroom or boudoir. Never accept a partially used bottle as a cast-off gift. Never, EVER use another woman’s perfume after she dies. DO NOT DO THIS. Yes, you must waste it.

In the turn toward home I found an open sleeve of saltine crackers, half of them eaten, in nearly the same location as last month’s half-eaten can of peaches. Remember? Outside the funeral home? This was another offering to the dead but not nearly as tidy. Several crackers had fallen from the sleeve and become swollen with melted snow water. My dog gobbled up the pallid groundwater dumplings while I rushed to snatch away the package. I couldn’t have my dog eating an offering for the dead. I considered what to do with it. I shouldn’t be handling it at all but he’d already violated the offering. It was tainted now. The lesser of the evils was to dispose of it rather than have my dog devour it or abandon an offering no longer viable. But it was certainly not less difficult.

It is very hard to run with an open package of saltines in your hand, especially if it is ripped deeply down the side. It’s nearly impossible to keep the damn plastic closed one-handed, and if you crush the crackers in the process they leak out through the tear and the dog gets them anyway. If you have mastered the art of running while gingerly holding something in front of you with both hands, I tip my hat to you. I have not. It’s the most confounding thing. It’s awkward and uncomfortable. So I had to walk until we passed a garbage can. I said a quick prayer for the offeree and the offeror as I tossed the remainder of the crackers and then ran straight home. I’d had enough.

It’s Sunday now. It’s raining but it’s warm. If we get a break in the precip I’d like to get out and make up the miles I missed while it was eight degrees and slippery this week. But damn. I shudder to think what I might find out there today. And it’s not like I can just avert my eyes or pretend magic isn’t real or that the dead aren’t still among us or the color purple isn’t powerful or that witches don’t sometimes tempt each other or that creatures of The Deep don’t also opt for cheaper products from overseas or that god-fearing people don’t print their own money rather than render under Caesar. I’m not normal, ergo I’m not able. I can’t not see or unsee what’s out there on there on the street. If I run, I see. If I see, I write. If I write, you read. If you read, knowledge spreads.

That’s how woo works. It’s integrated into daily life because it is daily life. All the time, everywhere, with everyone. All you have to do is notice. When you notice, you learn.