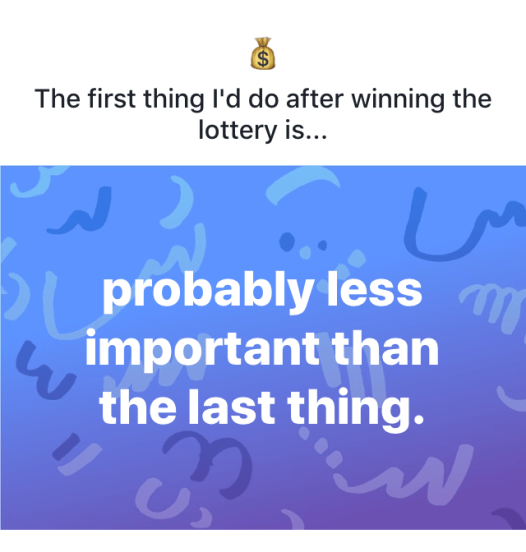 It baffles me that people still fantasize about things like this instead of living the lives they want with the means they’ve got. From a practicality standpoint the time and money spent playing the lottery for a one in ever-escalating millions chance of winning could be spent improving our existing lives in a million different ways. Or the lives of others, if that’s what you contend you’d do with winnings. Every dollar that doesn’t win is a dollar we sacrifice from our quality of life or don’t devote to the hypothetical other lives we’d improve. Yet if asked to donate those daily dollars to the fantasy outcome right now, most will claim they can’t afford it.

Who gets rich off the dollars spent playing the lottery? State governments. It’s a clever way of collecting revenue without calling it a tax but it’s basically the same thing. Lottery players who may claim they can’t afford to pay higher taxes willingly, cheerfully, and voluntarily pay more in taxes by paying in to lottery jackpots. It’s brilliant. And the argument that the money goes to fund education in the state is bogus after the first year. Education spending generally increases in the first year of a lottery but then decreases each year until it is lower than before the lottery. But folks keep paying in. And have you heard about those states who use lottery revenue to lower some taxes? That’s raising one tax to pay another, y’all. I say again, brilliant.

A more relevant question to the average taxpayer might be, What will you do if you don’t win the lottery? Answer, Give my money to the government with no return on the investment. Or alternatively, Give my money to someone else to win. Somebody’s got to win it, right? If it’s not you then you funded someone else’s jackpot whose lottery dreams probably aren’t to revitalize education in your state. I used to say my biggest objection to the lottery is that it makes poor poorer. It also makes them less educated, not more. If we want to boost education in our respective states we would do more good by taking dollars spent playing the lottery and using it to teach literacy, tutor someone, sponsor a kid, create a scholarship, open an enrichment program, feed or clothe students, provide transportation — you know, basically everything we want the government to do. Why keep paying them not to do it?