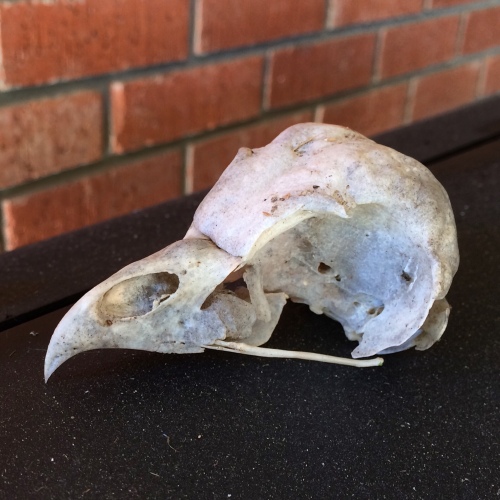 Look what I found while running today. It was right outside the gate to my property. Spotted it upon my return. Must have missed it on my first pass.

I assume it was once a hawk. That’s just a guess though. We also have an eagle sanctuary nearby. There were no other bones around (and no feathers) so perhaps the skull was blown my way by our recent storm winds. Remarkable that it survived intact. I mean, other than the fact it is disembodied. And I guess the lower jaw is missing. Or mandible or whatever the bottom beak of a bird is called. So not really intact; never mind. 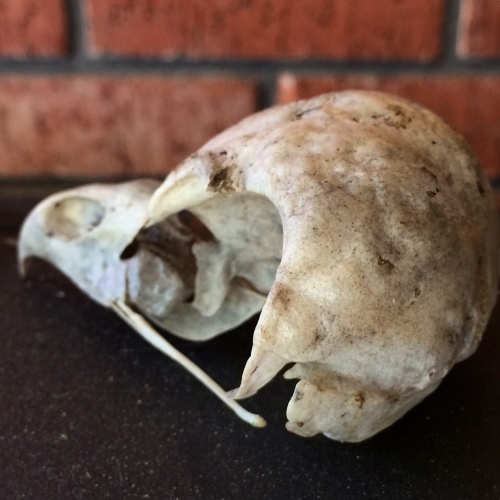 The back of the skull was facing me when it caught my eye. I thought, What’s that weird brain bubble mushroom? I gently poked it with a stick. Not a mushroom, obviously.

Roadkill is not an unusual sight on any given run. Thursday night I went for a run and was greeted by the requisite squished squirrel in the first quarter mile. Squished turtles, rabbits, cats, raccoons, and possums are also common sightings. All manner of dead birds dot the landscape with relative frequency. Remember the wing I found? You may even remember my post about finding a dead cow last summer. These things happen. But this is the first time I’ve found a skull — as in, just the skull.

I think it must be a tiny headdress. The missing bottom-ness is a clue. This is part of a ceremonial costume for folk small enough to wear it comfortably. This particular piece of pageantry must have either been abandoned in haste to take cover from the recent tornado or it was flung into the wind as an offering to the tornado gods. Either way, the wind and rain must have stripped away the customary beautification — you know, the plumage or festoonage typically applied to headresses to make them dressy. All the fancy got rubbed off.

If you put a Las Vegas showgirl (or showguy) in our spring storm winds, she’ll be buffeted until she’s stripped down to a wire frame and pasties, I assure you. Thus it is the same with bird skull headresses already so delicate and nearly weightless. We can only wonder what former glories this fairy helmet beheld.

Just for fun I asked God Google about bird skull omens or superstitions. From what I’m told, finding this avian cranium means my search for something is over, or my struggle with something is over. Or that an enemy has been vanquished or a battle won. It basically means the end of something. That seems a little obvious, given the skull itself is a sign that a bird died; so the end of a bird. But then I did find it at the end of a run, at the end of my property, at the end of the week, at the end of winter, so who’s to say? Is there a happy ending coming my way? Or a sad one? Or an ambivalent ending?

If so, I’ll follow up. But just in case there’s a ceremony somewhere missing a headdress I’ve decided to go back to my gate and leave a note. In case the folk who lost it are searching for it, I’ll offer the location of the skull with special emphasis on the fact that I took it only for safekeeping. I don’t want to cause the end of a tradition or the end of whatever mystical favor is routinely conjured by dancing with a hawk head. I’d also rather not cause the end of me.

I guess if I disappear you can assume it is a BAD thing to play finders keepers with a hawk skull. Or an eagle skull. Maybe I should leave some sort of gift or peace offering with the note. Some way to smooth over a breach of etiquette or offset a faux pas. I’m thinking sequins.

In the event I guessed wrong and this is neither a hawk nor an eagle and you can correctly identify my omen, I welcome your comment.