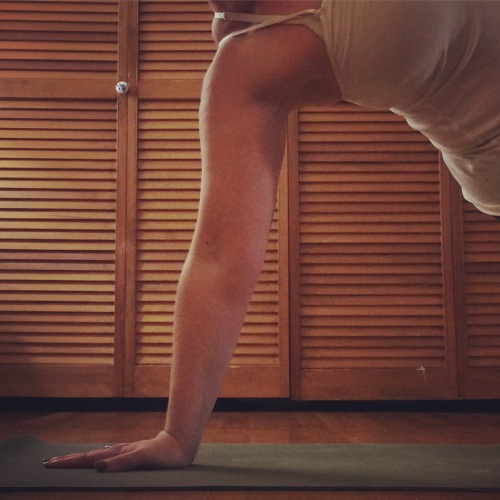 When I practice yoga with a streaming service I generally default to sorting the available classes by duration. You know, number of minutes. Not always but in the mornings before work, when I’ve got a specific number of minutes to practice, this is usually where I start. Scrolling through the options to find the class length I desire I wonder, Does anyone really do those five minute classes?  Or if I’m a bitchy mood, Really? Five minutes? Why bother with five minutes? Maybe if you’re a beginner? Or trying to master a certain sequence? Or break down a complicated pose, perhaps? But in general those fivers have been of little use (not tried) or interest to me.

Until now. I’ve found a use for those five minute classes. Imagine your sleep was disrupted by raging thunderstorms. Let’s say this started around 2 am and continued until dawn. Lightening, thunder, torrential rain and wind, on and on, repeatedly waking you up. Imagine someone else in the room gets the scream-tone weather alerts on a cell phone, waking you up to warn you about flash flooding in between booms of thunder. Suck-ass sleep to produce a suck-ass morning.

Let’s say you really don’t want to blow off your morning yoga practice because, let’s face it, you are a grouchy monster after such a fitful night. Yoga is exactly what you need but you don’t feel like doing it. Your tired brain can’t/won’t muster up a self-motivated practice and a streamed class of the one-hour-or-more variety feels too daunting with such low energy. Doing nothing is only going to make you feel worse so you grab the remote anyway and first option presented suddenly seems relevant. Can you face five minutes? Even if it’s just out of curiosity? Didn’t you always wonder what a five minute class could possible hold? Probably not the same old vinyasa, right?

So you try one. Nothing is likely to be too awful; not for only five minutes, right? And you feel pretty good after that five minutes. So you click another. And another. And another after that. And maybe at least one of those is flow. Maybe one of them is strengthening or grounding or centering. Maybe one of them is stretchy. A little core. Some twists. Maybe one is a meditation. But none of it is more than five minutes so none of it stacks up in your irritable brain as too much of anything. And after you’ve strung together a bunch of those five minutes you’ve done a complete practice, and more importantly, you feel better.

Knowing I only had five minutes prompted me to focus and concentrate better than I would with a longer segment. And with such a sleepy brain, concentration was going to be my greatest challenge. But I found myself naturally coaching myself, I can do this for five minutes. And because the class was short on purpose, each pose was its own destination rather than a transition to a next pose. There was no filler sequence. Five minute increments of essential yoga with no bullshit. Maybe I found it refreshing because I was so weary and grumpy but also maybe because it is simply refreshing to do essential yoga mindfully and fully engaged instead of anticipating what comes next.

I wouldn’t have guessed I would break a sweat but I did. I wouldn’t have guessed I would find it so worthwhile versus just enough to get by. But check me out, all brighter-eyed and closer to cheerful and not dragging my ass into my work day. Won’t my coworkers appreciate it? Especially since they will be dragging in tired and raggedy from the same storms? Isn’t it more kind to us all to get up and get my mind right so we can ALL have a better day?

This runs parallel to one of my perennial arguments that when it comes to an office environment, team players eat breakfast. Hungry or not, we have a responsibility not to be unbearably grouchy all morning simply because we can’t be bothered feed ourselves before we leave the house. Lunch is four of five hours away and office snacks are crap. The nicest thing you can do for the people who have to deal with you all morning is to eat something. I feel the same way about morning yoga after a shitty night’s sleep.

On a regular morning after a good night’s sleep, would I find it tedious to cue up five-minute yoga classes in succession? Probably. But on a stormy morning following a night of storm-related disturbances, those fivers got me on the mat and kept me on the mat. Might work for you too, next time you’re dealing with the same.