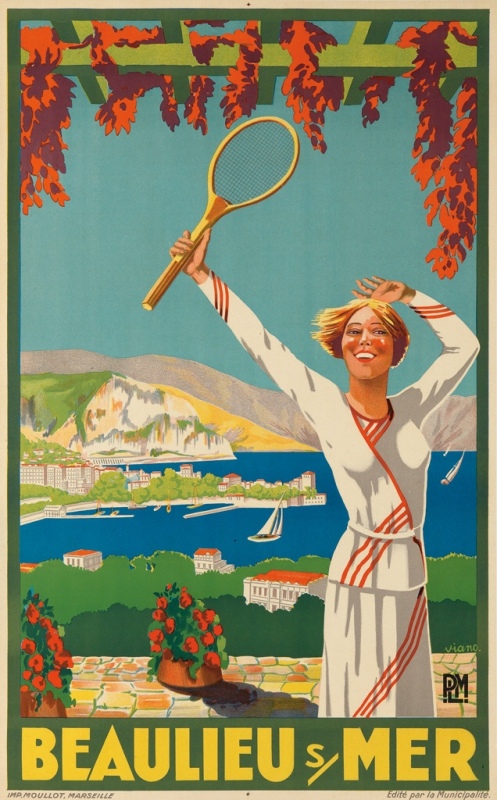 Tennis begins this evening. I doubt there will be sailboats. There definitely won’t be a mountain range or a resort with clay-tiled rooftops or arbors with hanging foliage. No ocean breezes to toss the pageboy haircuts of apple-cheeked ladies joyously thrusting.

It will be painted concrete enclosed by a chain link fence. The rooftops will be drab shingles approved by a committee. I doubt there will be any wind. Once the sun sets on Mercyburg the wind clears out. Since my severe pixie is still too short to move in any breeze, it won’t matter.

I won’t be apple-cheeked. I will look more like a pickled beet. And since I won’t be wearing any long-sleeved full-skirted Italian fashion, all of me will be visibly beety, not just my face. Will there be joyous thrusting? I can’t be sure. I think the modern equivalent might be fist-pumping, judging from the images produced when I google Tennis Joy.

I suspect thrusting is as passé as that Beaulieu stripey outfit. Modern-day tennis-istas make fists and fall on their knees. Or fall all the way down like they are fainting or dying. There is a lot of screaming. And sobbing. From what I can tell tennis is very emotional. Whether one thrusts, pumps, or falls it seems a public display of strong emotion is appropriate. Win or lose, one doesn’t just calmly walk off the court, as I suspect will be my natural default reaction. I’m going to look volcanic in my full-body flush but freakishly placid as I saunter away without a spectacle.

I also won’t be wearing a branded tight-fitting tennis ensemble. I will be reporting for lessons in old running clothes. With my titties put well away. And unshaven legs. And unshaven pits. My old running skirts are far longer than tennis skirts. And they are flouncy, not svelte. And wildly printed, not solid. I did buy proper court shoes because my runners aren’t supportive enough for lateral cuts but a wide forefoot means I bought clown shoes. Not nimble. Not pert. Not lissom. Functional and probably uncool.

The neighborhood is expensive but the lessons are cheap. Only $60.00 for eight weeks, plus a racket. It’s a brilliant way to get folks to join the statewide tennis association at the end of lessons, whereupon you pay dues and then pay to compete in tournaments. I had my choice of lesson locations but I chose this one because it required the shortest drive to and from Chez Mercy irrespective of swank.

I am nervous. I’m not buying into the image just for lessons. I’m not worried about being a clunky beginner whiffing balls and making mistakes. It’s the tennis image of expensive clothes, custom gear, and affluent people. The website for the tennis facility features only photos of sleek white men smashing the ball and sleek white couples high-fiving on the court. The one visible woman is white, thin, tanned, with flowing blonde hair (no ponytail) and cleavage on display. Tennis Barbie and Kens. This does not encourage me. But I realized after a few clicks the tennis facility is owned by the homeowners association. These photos are either the homeowners themselves or these are the kind of folks the association desires.

No diversity. No big butts or guts. Where are the sweat stains? How do you play tennis with long hair in your face? Where are the woefully untanned white girls? Or the black folks? The awkward dudes wearing safety goggles? The seniors? People playing in old t-shirts with $20 rackets? The rowdy kids running around? When I play tennis at my local city park these are the folks I see, not Barbie and Ken. I’ve gotten used to missing shots surrounded by redneck birthday parties over at the picnic tables and caring not. But will I be so blithe and unconcerned as I’m being inspected by tournament pros?

There’s a Facebook page for the facility because of course there is. Any thing generating revenue is doing it on Facebook. I clicked. Scrolling way past the ladies who lunch in spotless designer tennis dresses and full makeup I was somewhat relieved. The cheap lessons bring in regular people who don’t live in the community. In additional to the fitness model models I saw fat bodies and old bodies and people of color. That’s a relief.

No hairy women though. No cellulite showing. No too-short pixies. I did see a couple of heavy sweat-ers. No one was purple with exertion but one lady was mildly flushy. I doubt anyone will try to sell me a home in the neighborhood but at least I won’t be the lone interloper among the gentry.

I recognize that feeling nervous about any of this is a choice. But I remember my days of team sports all too well. Softball. Basketball. Volleyball. Track. I know I’m not conjuring up an unlikely scenario here. I’m prepping for a likelihood. And I’d like to handle it well.  In my younger days I pretended not to hear it when my teammates made fun of me or I pretended not to care. I had no skill or motivation to do any differently. Now that I’ve lived and learned some life I’d like to do differently. So this nervousness is also related to learning the new social skill of handling it well.

You might advise me that I could avoid the whole business if I  would just ante up and play the part. Get a cute outfit and shave myself. Or not shave but cover myself. Wear a hat too. Wouldn’t that be easier than learning how to deal with it when people make fun of me? Save myself the trouble, right? Fake it to fit in so I can focus on the tennis, yes? It’s only for eight weeks, isn’t it?

No. I’d rather build a world where women can play sports together without making fun of each other for looking or being different. This starts with not hiding the differences. If I’m going to be the change I want to see in the world I’ll have to start with the less easy path of being different. And while it’s probably going to take longer than eight weeks to change the world it won’t change at all if we don’t start somewhere.