Those pink pens. I bought them because I needed pens and they were price-slashed on clearance. The office supply store stocked them for the month of breast cancer awareness. Once the month was over, get those pink pens out of here. Nobody wants those.

I had just opened my yoga business. Money was tight. I was spending it on renting a yoga space, buying mats, paying a partner, and liability insurance. When I needed pens I bought the clearance charity pens. This was years ago. I’ve run out of those pink pens many times over and every time I do I get more, even if they are not on clearance. They remind me of the way it felt to open a small business. The way it felt to be my own boss. The way it feels to be a teacher. Speak truth in my own voice. According to my own rules. Motivated by my own convictions and desires to help people heal. Yoga as healing.

I never need much conjured bravery when it comes to teaching or speaking to a group of people. It comes naturally. There is a wellspring within. A reservoir. A conduit, maybe. Some kind of natural power. For this I am always strong, always confident, without trying. It just comes. Or it’s always there. And it feels exquisite. During. After. And it creates momentum so I’ll want to do it again. When they ask me to preach at the gay church I plug right back in to that power current even after all these years away from teaching. Natural born teacher. Word Witch. The pink pens remind me that such a thing lives inside me. And now pink things on clearance have become a power theme.

The foxy box was in the photo was another pink power purchase. Marked down to clear. In a bookstore. Everyone bought the blue ones and the green ones. No one wanted the pink foxy box. Because it was obviously mine. It was filled with a set of foxy magnets I needed for a whiteboard. So I could have that pink pen feeling when I led training. Confident trainer. Inspiring confident trainees. Tapping that source through a color. Instant connection and alignment in a glance. A sacred trigger.

When I went in search of tennis skirts, guess which ones were and always are on clearance? Yep. The pink ones. No one wants the pink ones. In every style the pink ones are always the leftover stock. I not only get a deep discount, I get that pink pen feeling when I slide those pink sheathes over my hips. Powerful hips. On the court. Off the court. Same with running shoes and yoga pants. And the irony is that pink has perennially been my least preferred color. But whenever I need a utilitarian object and I don’t want to pay full price, you can bet there is a pink version of it waiting in the bargain bin. I value the power as much as the bargain.

Color. It intrigues me endlessly. The ways we respond to color. The ways we use color. The Handmaid’s Tale. Pride flags. I adopted this cat before I became vegan. She probably doesn’t look pink to you, but when I beheld all the other options available at the shelter, she was the pink cat. No one was going to choose her, the Plain Jane grey tabby.

A grey drabby. Not silver. Not remarkable. In a sea of calicos and tortoiseshells and cinnamons and blacks and whites and mixes and even a smoky blue, she would have been the leftover. I admit I went in to adopt the smoky blue. I reserved him. I named him before he was even ready to adopt. I visited him. I wrote about him. I left him behind and walked out with a pink pen clearance cat instead. 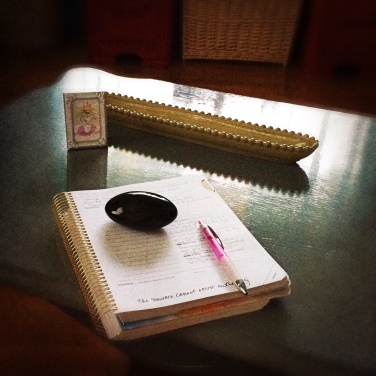 This personal pink penchant was set in motion long before the pink pussyhats hit the political scene. And although I smiled sisterly at the photos of all those fuzzy heads in the protest press, I knew then as I know now that all of those hats will end up cast off in a yard sale some day because they are pink. The hats have become controversial even within the resistance in part because they are pink. Pink polarizes.

Not all pussies are pink. And not all women and non-binary folks feel that pink accurately represents the femme aspects of their identities. Not all women/femmes have pussies. Not all activists feel that the vagina and/or its nicknames constructively represent their positions in a political statement. Not all protesters want to be identified by an anatomical moniker. Complications. Connotations. Implications. History. Exclusion. For years I eschewed and even boycotted the color pink for the same reasons. The pink pen power is not necessarily pussy power. However, anything I consider divinely inspired includes the sacred feminine, which I embody. Having a pink pussy is a coincidence and not a prerequisite.

I had to pause here to answer the door. Amazon just delivered a box of pink pens. I knew they were coming today; the pens. My local office supply only stocks them in October so I have to order them online if I need them in the breast cancer off-season. In November they will be on clearance again and then I can snatch them up on the cheap. You might wonder why I needed more if I still have five left in the cup shown above. I’m a writer. I still journal long-hand. I plan long-hand. And I use them for everything else so I use them up quickly.

This is the only pen which doesn’t get stolen off my desk at work. No one steals the pink pen. It’s the only pen which doesn’t end up in The Chef’s possession. The Chef doesn’t want a pink pen. It’s the only pen handed back immediately after someone borrows it. No one keeps the pink pen. The ink is black. The point is medium. The grip is premium. It’s a great pen but no one wants it because it is pink and not October. So I can use them everywhere, for everything, all the time, without losing them, which means I go through them like a chain-smoker. I’m the only one who understands their power.

Among my inner circle I used to refer to them jokingly as breast cancer pens. (This may explain why no one wants them.) But breast cancer is not a joke so I stopped. By default I started calling them booby pens. Every October I extended the descriptive to anything instantly rendered pink for awareness. When Major League Baseball does it each year I would comment on the booby bats and booby cleats and booby gloves and booby socks. But I’ve decided to stop using gender-based anatomy as a joke. I evolved. My anatomy is not fodder for anyone’s jokes, so no one else’s should be fodder for mine.