Things I find while out on a run now include a dinosaur,

At first I thought this boat was abandoned. Although it is tied to a tree it is waterlogged and full of plastic. After a moment’s reflection I decided it made more sense to assume this is a plastic bottle ferry. The ferrier must have been on break when I ran by. Ferrier is my gender-neutral substitute for ferryman. Not to be confused with farrier. The ferrier also took the paddles and/or motor, which is why I initially assumed abandonment.

The puddle was likely rain water, which must have been a delight to the plastic passengers on this muggy buggy afternoon. They appear to be floating contentedly, waiting to be ferried across the river. I guess the rainy end of the boat is the riverbank equivalent of a swimming pool on a cruise ship.

They chose an odd day for boating though. As you can see, it was a day better suited for just about anything else. But what do I know about the riverboat pleasures of plastic bottles? Perhaps for them this is a fine day to take a cruise through the lily pads. 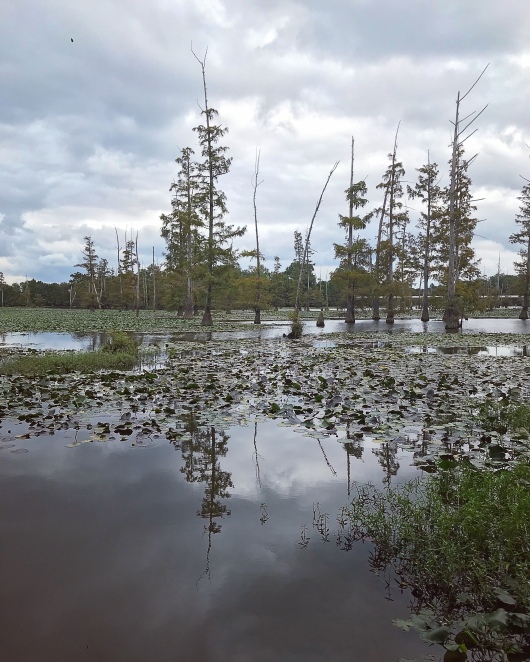 Rumor has it there are alligators in this river. I’ve seen photos. There are warnings about the swampy areas. This may be why the plastic passengers are lying so low and languid. 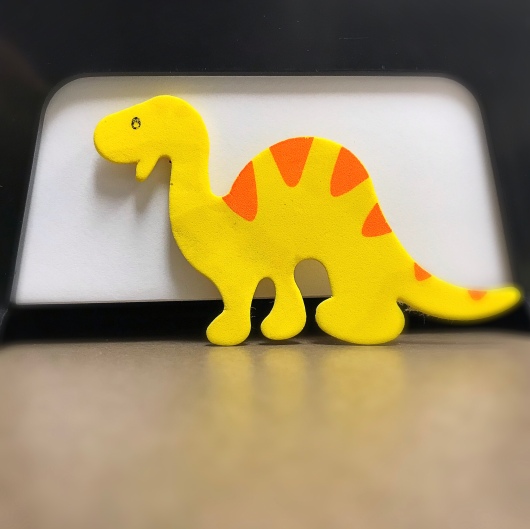 I found the dinosaur at the end of the run, as I was walking back to my car. I don’t recall ever encountering a three-legged dinosaur before. He/she has only one massive rear leg rather than two similar to the front legs. Like an elephant foot growing out of the lower abdomen. Or maybe his/her rear legs were born fused and the stumpy shape is a result of ambulating with a hop and/or drag.

Honestly, this looks more like an exotic lizard than a dinosaur. Maybe it’s a hybrid, like a designer dog breed. An ele-newt. Or eleph-ewt. I assume the cross-breeding of an elephant with a lizard happens in a Petri dish in a lab somewhere since the natural way seems impossible. I’ll bet someone did this just to see if it could be done. Perhaps the plastic bottles were on their way to see it, or having just seen it, were heading back across the river post-safari. Gators be damned, a modern-day elephant lizard just had to be witnessed.

An adhesive had been applied to the right flank of liz-aphant, presumably to immobilize the captive since there were rocks stuck to it. If that was indeed the case, the freak show was over as soon as I realized the poor thing was trapped. I confiscated the ele-zard, cleaned it up, pried all the rocks off, and gave it to the Grandcub. You know, to love and nurture.

Maybe later. He might be too young to appreciate what I’ve done here, bringing him a miracle of nature rescued from a life of exploitation by unscrupulous ferriers and perpetually gawking tourists. That’s okay. It will keep. Or if it doesn’t I suppose I’ll have a cool fossil to give him some day.

If that boat full of thrill seekers is beached again the next time I go for a run I plan to brave the gators, fish those floaters out of their puddle pool, and recycle their plastic asses to teach them a lesson. This is for the three-legged chameleophant. The orange-banded elegecko. The Southern long-necked iguanaphant. Shut up. You know the one.